What is trigeminal neuralgia 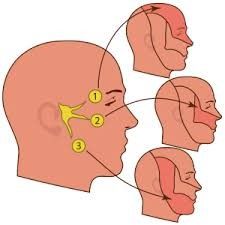 Trigeminal neuralgia (TN or TGN) is a chronic pain disorder that affects the trigeminal nerve. There are two main types: typical and atypical trigeminal neuralgia. The typical form results in episodes of severe, sudden, shock like pain in one side of the face that lasts for seconds to a few minutes. Groups of these episodes can occur over a few hours. The atypical form results in a constant burning pain that is less severe. Episodes may be triggered by any touch to the face. Both forms may occur in the same person. It is one of the most painful conditions and can result in depression.

The exact cause is unclear but believed to involve loss of the myelin around the trigeminal nerve.This may occur due to compression from a blood vessel as the nerve exits the brain stem, multiple sclerosis, stroke, or trauma. Less common causes include a tumor or arteriovenous malformation. It is a type of nerve pain. Diagnosis is typically based on the symptoms after ruling out other possible causes such as postherpetic neuralgia.

How does acupuncture treat trigeminal neuralgia?